In 1961 my father was asked by the leader of Congregation Mishkan Israel to make a pickup at the New Haven train station. The arriving passenger, scheduled to address our reform congregation from the synagogue’s pulpit that evening, was a man whom our rabbi Robert E. Goldberg had met as a fellow inmate in a Georgia jailhouse. The passenger’s name—Rev. Dr. Martin Luther King, Jr.

An early and longtime champion of civil rights and social justice, Rabbi Goldberg was arrested with Dr. King in 1961 during a peaceful demonstration in Albany, Georgia that was organized to help end the segregation of the city’s public facilities and give African-Americans the right to vote. The two men were assigned as cellmates and during the course of their discussions, Goldberg invited the great man to speak at his spanking new reform temple on Ridge Road in Hamden, Connecticut.

Since one of the many responsibilities of the president of the Congregation, Mishkan was to provide transportation to visiting speakers and visitors. It fell to my dad to pick up Martin Luther King at the railroad station on the day he was to speak from the pulpit to the congregants at our temple. Following the event, as they made their way back to the train station, it soon became clear that both men were famished. Dad suggested they head over to Yankee Doodle, a burger shop and college hangout located directly behind the J. Press York Street store.

After both men made short work of the cheeseburgers, fries, and chocolate milk shakes at the narrow sandwich counter, Dr. King suggested, “Mr. Press, how about taking a visiting preacher on a tour of J. Press?”

My dad often spoke of how Dr. King closely and curiously examined the hundreds of ties strewn along the open counter—picking up reps, ancient madders, and wool challis and asking about the history of each and how each should be worn. Interrupting his visitor’s line of questioning, Dad chose a midnight blue emblematic tie with crests from one of the Yale colleges and folded it into a long narrow tie bag emblazoned with the J. Press circular logo.
“It’s on me,” he told King, “but you’ve got to promise me you’ll wear the tie and show the bag.”

Several years later, on a vacation, my father and Dr. King happened to meet by chance at the San Juan, Puerto Rico airport. Taking a chance that the recent Nobel Laureate would recall the night at the Doodle as clearly as he did, my dad quickly made his way over to civil rights leader.

“Dr. King, you may not remember me…” my father began. Martin Luther King jumped in without missing a beat. 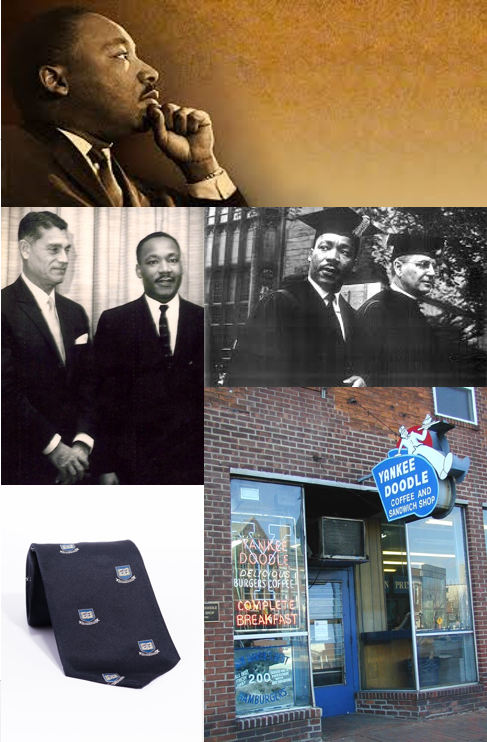 Out on the Town with Sinatra