The laws of acceptance and exclusion were epiphanies I experienced during my days at the prep school Loomis (now known as Loomis Chaffee) on its lush campus down the road from the then 1950s Norman Rockwell town of Windsor, Connecticut. My standing on the popularity chart skyrocketed November 22, 1954, the day LIFE Magazine came on the stands heralding the Ivy League Look, “a national style sweeping the country from its wellspring of J. Press in New Haven.” The magazine turned up in every student and faculty room on campus.

Before World War I Grandpa Jacobi began merchant-tailor trunk shows at boarding schools throughout the Northeast. Loomis was alone refusing him entree. “Mr. Press,” founding Headmaster Nathaniel Horton Batchelder told my grandfather, “one-third of my boys receive financial aid. They can’t afford custom suits. I won’t allow them to be embarrassed unable to patronize your shop on campus.” Grandpa thereafter declared Loomis “the most democratic prep school in the country.” His sense of fair play overcame the retail setback paving way for three of his grandchildren to graduate from Loomis.

In 1954, the Ivy League Look was the preppy look of the time. Boarding schools required coats and ties for classes upgrading the requirement to suits for mandatory Sunday Chapel. Carrying the flag for J. Press, the bar was set much higher for me. My narrow dorm closet was stuffed to the gills in Homespun Shetland.

In the yearbook picture of the Loomistakes, a cappella songsters, I am the only member of the team with tie clip and grey flannel trousers. Blue jeans were too proletarian for boarding school elitists, choosing khakis as their standard gear purchased for $3.99 from local Army-Navy Surplus stores. We also mimed Yalie sprezzatura sporting very dirty white bucks “until they were so tattered they bared your toes.” Tab collar shirts were nearly as popular as OCBDs. Sport Coats were tan herringbones competing on an even basis with classic blue blazers.

The 1950s college admissions were less fraught for prep school applicants in those pre-diverse times. For the record, the Loomistakers went on to Yale, Princeton, Harvard, Dartmouth (moi), Middlebury, and the all-American Hollywood handsome guy in the middle, the University of North Carolina at Chapel Hill.

Breaking News 65 years later: the WASPY blond honcho in the middle beat me out for the honor of Class Best Dressed. 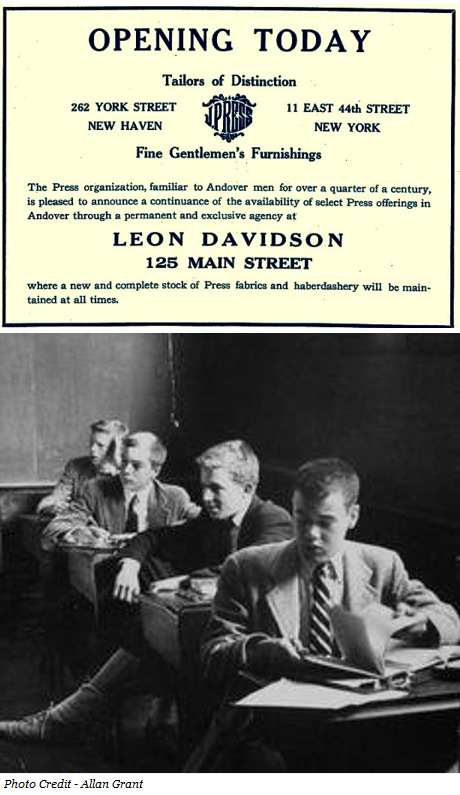 The Music Of My Misspent Youth