“At Yale and Harvard,” he noted, “sex is not taboo. But when the catalogue comes from Brooks Brothers and J. Press, that’s something they whip out only in private. And they can hardly wait. They’re in the old room there poring over all that tweedy thatchy language about ‘Our Exclusive Shirtings’ the ‘Finest Lairdsmoor Heather Hopsacking,’ ‘Clearspun Rocking Druid Worsteds’ and searching like detectives, the shirt with the flap over the breast pocket (J. Press)…”

The J. Press Brochure came of age in the middle 1950s under the stewardship of CEO Irving Press, 1928 Yale Law School graduate and his doppelganger, John Norey, formerly a British tailor in the Stokes-Newington section of London before emigrating in 1950 to the United States eventually becoming J. Press Merchandise Manager.

The team holed up semi-annually at The Yale Club for 3 days coming out of their Eli hideout with their 32 page brochure script. My favorite squib appeared in 1959 when I began my stint “on the floor” at the old upstairs quarters on Madison and 44th. Introducing J. Press Superfine Cashmere Suits (priced at $125), “of the finest imported cashmeres reinforced with a minor percentage of fine worsted yarns for extraordinary tensile strength and shape retention. These are indeed princely suitings for touch and appearance hitherto obtainable only in custom productions at twice their price.”

David Ogilvy, advertising tycoon known as the “Father of Advertising,” was a longtime J. Press bespoke aficionado. I remember Irving Press showing him proofs of the new brochure. “Mr. Press,” you don’t need my input. Just keep doing what you’re doing so well.”

The philosophy of The J. Press Brochure always adhered to the Ogilvy maxim, “The more informative your advertising, the more persuasive it will be.”

Follow the fold and stay tuned for the timely arrival of the 2019 J. Press Spring & Summer Brochure. 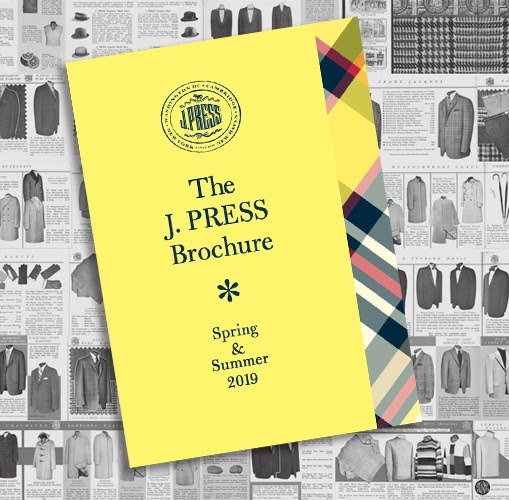 Employee of the Year…. For Fifty Years