The encyclopedic J. Press necktie collection my dad, Paul Press stored in his home closet prompted patriarchal competition that spurred my change to bow ties. There was simply no way I could challenge my father’s necktie collection on my starter salary, even granted a generous employee discount. And I couldn’t borrow from him anymore when I moved after college from hometown New Haven to New York City.

My own bow tie collection, gregarious as it may be, offers little competition with the Bow Tie Headquarters inventory available today on the shelves of J. Press.

In an extraordinarily witty and cleverly packaged book by James Gulliver Oliver succinctly titled The Bow Tie Book addresses the idiosyncratic cravat style alternately viewed as eccentric, erratic, professorial, bohemian and Churchillian. Social Primer K. Cooper Ray claims, “Whenever I wear one, women smile,” a view hardly shared several pages later with the Duke of Windsor arrogantly knotting a flawless bow. Political pundit Tucker Carlson’s appraisal, “When you wear a bow tie, you have to turn off the part of the brain that cares about other people’s perceptions.” His neuropsychological diagnosis occurred prior to his long-tie conversion.

Russell Smith observed in the Toronto, Canada Globe and Mail, “Bow ties are tricky: They carry strong connotations: conservative, newspaperman, high-school principal. They are instant signs of nerd in Hollywood movies. They look fastidious but not exactly sexy. I like them.”

Harvard professor, JFK advisor, and J. Press customer Arthur Schlesinger, Jr., famously quipped, “It is impossible, or at least, it requires more agility to spill anything on a bow tie.” Another J. Squeeze bow tie regular, New Haven pediatrician Dr. Benjamin Spock, rationally favored them to protect spreading any germs that might attach themselves to a long tie.

My personal preference beginning the 1960s prompted a continuously enlarged J. Press inventory of the genre serving magnet for the bow tie mentally deranged. The tradition continues full force at J. Press, a worthy antidote to Windsor Knotters and the Every-Day-Is-Casual-Friday tieless. 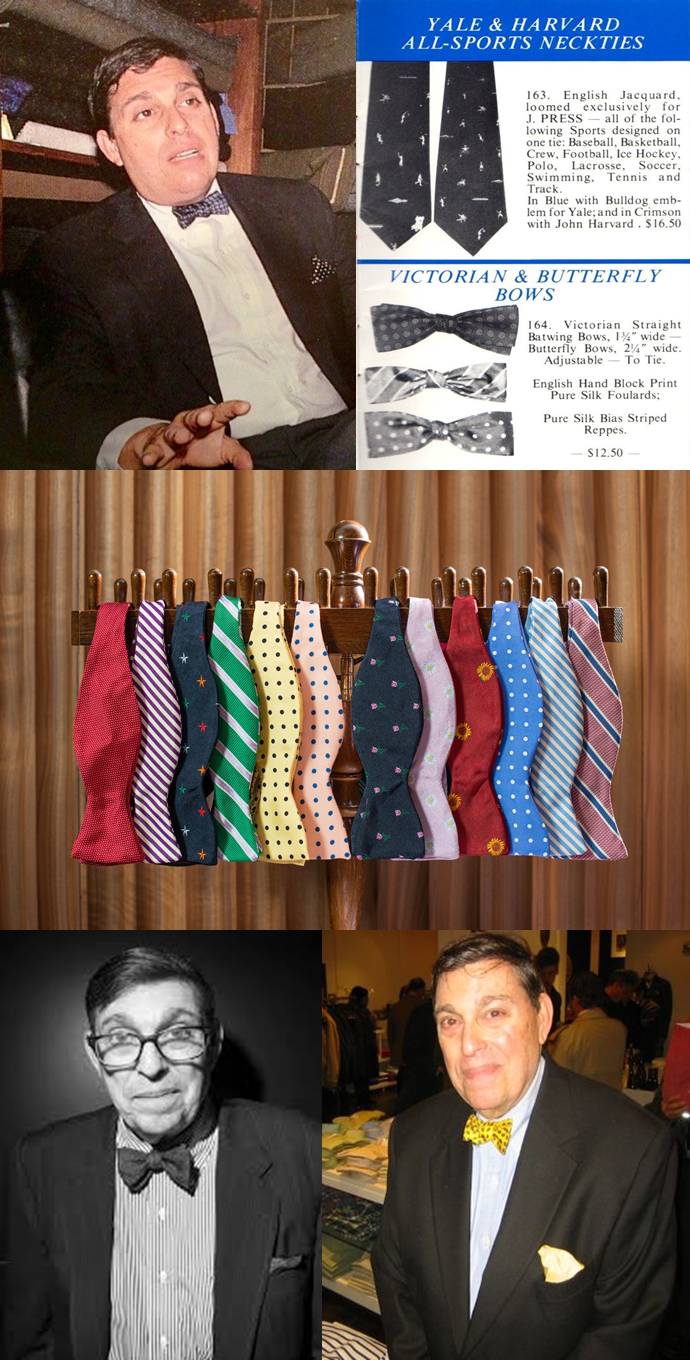