My days at Dear Old Dartmouth began on a September morn 64 years ago with Dad twisting his way along the old Route 5 in his Buick Super convertible, top down, and Mom inhaling a pack of Camels during the then five-and-a-half-hour drive from New Haven to Hanover.

This was during the virgin voyage to the granite of New Hampshire that my father disclosed the convoluted history of Ivy League clothiers at Dartmouth. His father Jacobi Press originally traveled to the Hanover Inn during the early 1920s, taking bespoke orders from students he originally sold at boarding school. He carried all his merchandise in battered cloth sample bags on the train to nearby White River Junction. The original Hanover Inn, remodeled several times since, remains owned and operated by Dartmouth College on the same corner of Wheelock and Main Street facing the college green. Subsequent J.Press sales reps followed their founder joining other clothing and haberdashery merchants selling their wares out of guest rooms at the Inn. The roster included Brooks Brothers, Chipp, Arthur M. Rosenberg, Langrock, Rosenthal Maretz, Fenn-Feinstein and The Andover Shop.

James Campion was Hanover’s prominent menswear retail establishment in the 1950s, located adjacent to the Main Street coffee shop entrance of the Hanover Inn. Campion vigorously lobbied Hanover big wigs to restrict any business that did not own or lease a property in the town convincing the Hanover Inn to discontinue permitting retail exhibits at the hotel.

Informed of the new restrictions, my father quickly leased a 450-square-foot, second-floor studio apartment upstairs from the Dartmouth Co-op, enabling J. Press to continue monthly travel exhibits unhindered by Campion’s legal machinations. The Blazer Brawl occurred two years before I entered Dartmouth when Gene Thorne, the J.Press Road Traveler, finagled a contract to outfit the class of 1953 in their blazers, a Dartmouth tradition consisting of green wool flannel blazer with class numerals prominently sewn on the front breast pocket. Thorne was a Hollywood handsome fixture at the J. Press Cambridge store, ingratiating himself with scores of collegians on road-trips to Amherst, Williams, and providentially, the upscale Psi Upsilon fraternity house at Dartmouth. His customers and contacts at Psi U were class officers who awarded him the blazer contract formerly the province of Campion. Jim Campion regarded the J. Press sneak attack an Act of War.

The Ides of March was the appointed time set for Thorne to take blazer measurements, but Campion had other ideas. “Big Jim” as he was known, hired two football bruisers to stand guard at the door in front of the J. Press stairway steering everybody to his store across the street. Thorne immediately got wind of the crisis early in the morning, making an emergency call to my father in New Haven. Paul Press made a dash through the winding hills arriving at the dean’s office by late afternoon. Dean of the College Joe MacDonald, a six-foot-four ruddy outdoorsman with judicial affect befitting his stature, agreed to hear both sides of the dispute. Immediately Campion spouted a tyrannical rant against my Route-5-beleaguered dad. After listening closely to both men, Joe MacDonald shortly thereafter validated the original contract, warning Campion of punitive action if he did not cease and desist his activities against J.Press.

Gene Thorne and my dad spent the next three days completing blazer measurements on 700-plus members of the graduating class. Campion later got his revenge. The following year he won the contract back and Gene Thorne left J.Press for The Andover Shop leasing a competing showroom down the hall from his former employer.

Shortly after settling in my spare dorm room, parents gone, accoutred in the required freshman beanie and “Dick Press ‘59” name tag, I set forth with dormmates to Campion’s store to buy a Dartmouth sweatshirt and fireplace beer mug. Big Jim Campion greeted my fellow classmates and spotting the “Dick Press ‘59” tag immediately escorted me out the door, telling me to take my (expletives deleted) business elsewhere.

When my parents returned to Hanover for my graduation, the first order of business for Paul Press was a visit to the J. Press showroom he hadn’t seen in four years. I had made a deal with Jack Kennedy, our road traveler, to keep it between us that I refurbished the slender space with a bar, pull-out bed, poker table, and chairs. My exposure was imminent. Dad erupted when he saw the place. “What hell’s going on here? It looks like a goddamn whorehouse.”

The paternal pride of my Dartmouth degree overcame my dad’s post-traumatic stress allowing him to overlook the James Campion 1959 Class Blazer hidden under my flowing graduation robe. 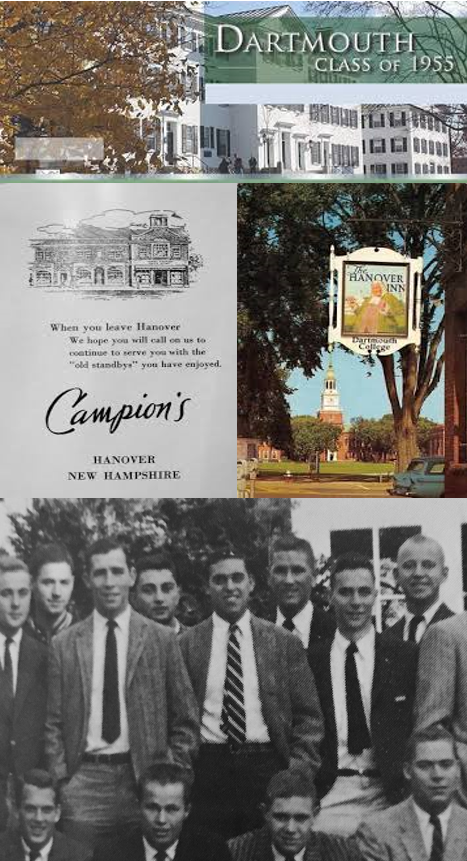 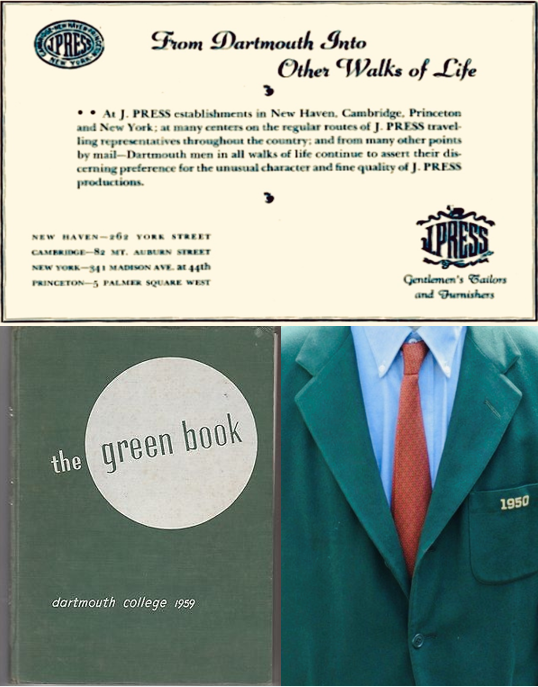